Ruby is a red gemstone that has variations between pink to blood red and is one type of corundum mineral (Al2O3). Ruby quality is determined by its color, cut, and clarity, which along with the weight of the rust, affect its value. The brightest and most valuable red and dove are called red blood or blood pigeons, giving a large premium over other Ruby which has similar qualities. After colors follow clarity: similar to diamonds, clear stones will give premium orders, but rubies without rutile inclusions such as needles may indicate that the stone has been processed. Ruby is a traditional birthstone for July and is usually more pink than garnet, although some garnet rhodolites have pink hues similar to most rubies. The most valuable ruby ​​in the world is Ruby Sunrise.

Red color in Ruby is mainly caused by chromium (aluminum oxide) with a Hexagonal crystal system. The best Ruby is blood red (Blood) and Crystal originating from Myanmar, known as Burmese Ruby. Whereas African Ruby Stone is a bit dark red and not crystal. Ruby symbolizes courage, strength and luck for the wearer. 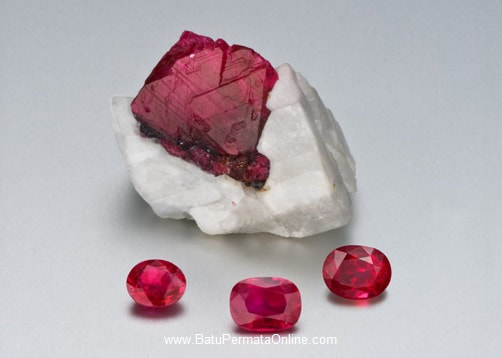 Ruby has a hardness of 9 on the Mohs scale of mineral hardness. Among the natural gems only Diamond is harder which has a hardness of 10 Mohs scale. Ruby and Sapphire are pure corundum types of alumina, the most stable form of Al2O3, where 3 electrons leave each aluminum ion to join the regular octahedral group of the six closest O2 ions; In pure corundum, these leaves produce all aluminum ions with a very stable configuration of unpaired electrons or unmet energy levels, and the crystals are very colorless.

When a chromium atom replaces an occasional aluminum atom, it also loses 3 electrons to become chromium3 ions to maintain the balance of the Al2O3 crystal load. However, Cr3 + ions are larger and have electron orbitals in different directions than aluminum. The octahedral O2-ion arrangement is distorted, and the energy level of the different orbitals of the Cr3 + ion changes slightly due to the direction of the O2 ion. The energy difference corresponds to absorption in the ultraviolet, purple, and yellow-green spectrum regions.
Ruby transmittance in optical spectra and near-IR. Note the two wide purple and yellow-green absorption bands and one narrow absorption band at a wavelength of 694 nm, which is the wavelength of the ruby ​​laser.

If one percent of aluminum ion is replaced by chromium in Ruby, the absorption of yellow green produces red for the gem. In addition, absorption at one of the above wavelengths stimulates neon emission with a 694-nanometer wavelength red light, which adds to the red color and fragrance it feels.

After absorbing shortwave light, there is a short time interval when the ruby ​​crystal lattice is excited before fluorescence occurs. If 694 nanometer photons pass through the crystal during that time, they can stimulate more fluorescent photons to be emitted in phase with them, thereby strengthening the intensity of the red light. By arranging mirrors or other ways to release light emitted repeatedly through crystals, the ruby ​​laser in this way produces a very high coherent light intensity.

All natural Ruby has imperfections in it, including color impurities and inclusion of rutile needles known as "silk". Gemologists use needle inclusions found in natural rubies to distinguish them from synthetics, simulants, or substitutions. Usually, rough stones are heated before being cut. These days, almost all rubies are treated in several forms, with heat treatment being the most common practice. Rubies that are not treated with high-quality orders have a large premium.

Some rubies show three or six points of asterism or "stars". This ruby ​​is cut into cabochons to display the effect correctly. Asterism is best seen with one light source and moves across a rock when light moves or a stone is rotated. Such effects occur when light is reflected from "silk" (inclusion of structurally oriented rutile needles) in a certain way. This is one example where inclusion increases the value of gemstones. Furthermore, rubies can show discoloration - although this is very rare - as well as pleasure or the "cat eye" effect. 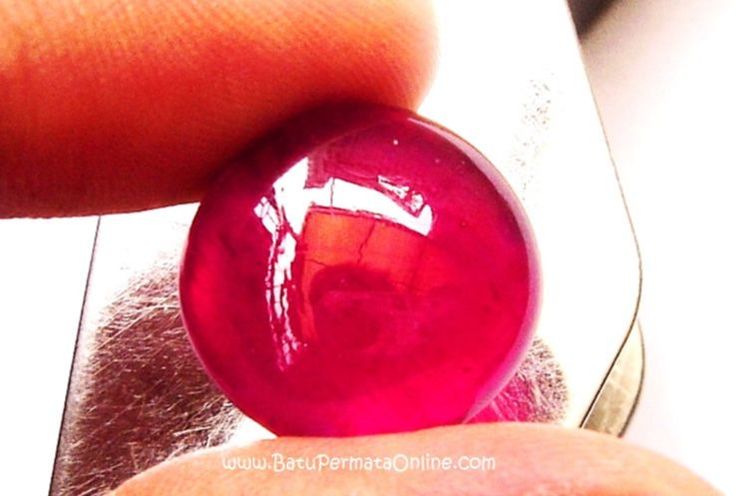 The Mogok Valley in Upper Myanmar (Burma) for centuries has become the main source of Ruby in the world. The area has produced some amazing rubies, but in recent years some good Ruby has been found. In central Myanmar, the Mong Hsu region began producing rubies during the 1990s and quickly became the main ruby ​​mining area in the world. The most recent ruby ​​deposit found in Myanmar is in Namya (Namyazeik) located in the northern state of Kachin.

Historically, rubies have also been mined in Thailand, in the Pailin and Samlout Districts in Cambodia, and in Afghanistan, Australia, Brazil, Colombia, India, Namibia, Japan, and Scotland; after the Second World War ruby ​​deposit was found in Madagascar, Nepal, Pakistan, Tajikistan, Tanzania and Vietnam. In Sri Lanka, shades of lighter rubies (often "pink sapphires") are more common. The Republic of Macedonia is the only country in mainland Europe that has natural rubies. They can be found mainly around the city of Prilep. Macedonian rubies have a unique raspberry color. Rubies are also included in Macedonian arms symbols. Some Ruby has been found in the U.S. state in Montana, North Carolina, South Carolina and Wyoming.

How to Determine Ruby Quality and Prices:
Ruby is one of the valuable tertiary items someone can have. If you save it as an investment in the future, its value will continue to rise. Understandably, diamonds are rare and expensive because they are not easy to mine. No wonder prospective investors need to recognize Ruby further to get the best quality as an investment.

From one raw Ruby obtained from mining, only 40 percent were declared of quality without a lot of fingerprints and were considered to be usable. While 60 percent is wasted or made as a diamond sharpener plate. Natural fingerprints are another term for the condition of a diamond that is less than perfect. The common language is a defective diamond. But diamonds include high-value luxury precious metals. The process of making it and its origin from land with a depth of hundreds of meters, makes diamonds contain natural fingerprints inside and not on the surface.