Ruby has been used as a gemstone for centuries, can be seen in various styles, mostly used as Ruby jewelry. Ruby is a durable material that can be used every day such as rings, earrings, necklaces and so on. In Indian-style jewelry, rubies are often mixed with Emerald and Diamonds. The gold setting provides a striking contrast with ruby red. 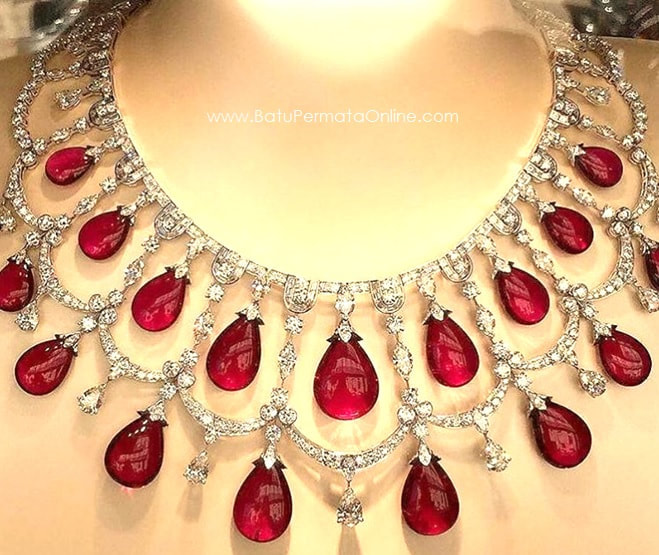 Characteristics of Ruby's distinctive clarity include the inclusion of thin minerals called needles. When the mineral is rutile and the needle is in the intersecting group, it is called silk. Fiber rock (Silk line) may be short or long and slim, and may appear to be tightly woven.

Ruby can also contain needles consisting of other minerals, small crystals, zones of color variation, or inclusions that resemble fingerprints.

Some inclusions can really contribute positively to the appearance of gems. The presence of rutile silk causes light to spread on all sides which may be too dark. This adds softness to the color and spreads the color more evenly over the crown of rubies.

Intersecting needles can also cause a star effect, called asterism, if the stone is cut with a curved surface.

VVS - Very, very little included - small inclusions that can be seen under 10x magnification, but not visible to the naked eye. No effect on appearance.

VS - Very little included - inclusions appear sometimes seen in the eyes without help, and are very easily seen under 10x magnification. Little has no effect on brilliance.

SI1 - Slightly included - large or multiple inclusions that can be easily seen under 10x magnification. This inclusion is very clear with the naked eye. Little effect on appearance, not the slightest effect on brilliance.

SI2 - A little included - clear inclusions that can be seen easily under 10x magnification. A little effect on appearance and brilliance.

I1 - Clear inclusion - significant effects on appearance, brilliance and transparency

I2 - leading inclusions - significant effects on appearance, brilliance and transparency

I3 - Many and prominent inclusions - severe effects on appearance, brilliance and transparency